.... I wonder from which one(s) the glass of organic milk I'm drinking came from, this must be the best milk I've ever tasted since I was a pre-schooler or so! 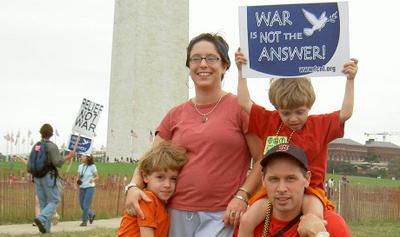 .... or Mom, Dad, we are tired! We all are very tired of the senseless Iraq War. I wish I could have marched too! Photo: Courtesy of a Philadelphia Yearly Meeting Visionary. Did you know that Tulsi is a plant revered by Hindu religious tradition? Which plants do you worship? I love our almendro tree! Many thanks to my friend Raj for the Tulsi photo and information.

Once I have a good photo of our almendro, I'll post it here for you. 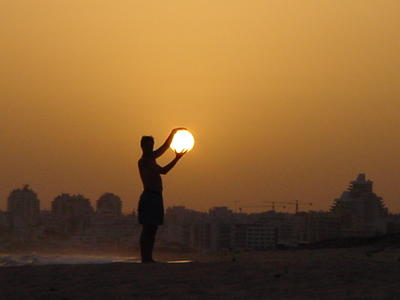 Ignacio's "Sole Mio" transports me far, far away, so I blogged it here too, for all of you who had not seen it.

My three nieces have inspired me to participate in a Parents Discussion Group, today I'm sharing with you a list of healthy snacks for children a young mother of two posted.

* "Pirate's Booty" snack by Robert's American Gourmet (basically a veggie
version of a cheese puff)
* "Veggie Stix"
* Whole wheat pretzels (TJs has some great ones in stick and nugget form)
* Cheese sticks or string cheese
* Dehydrated fruits and veggies called "Just Peas,"Just Carrots," etc.
* Annie's brand makes some tasty bunny crackers in BBQ, Ranch, Whole Wheat,
and Cheddar flavors
* How about yogurt-covered raisins or pretzels (the ones without partially
hydrogenated coconut oil, that is; I haven't checked the sugar grams on those,
though-they might be worse than candy)
* Hain's makes some yummy snacks, such as "Carrot Chips" (a tasty but
healthier version of a Frito, with carrot)
* What about a cereal that's fun to eat on its own? Like a cinnamon
mini shredded wheat?
* Mini-bagels?
* Pre-sliced apples (from TJs)

Do 40 seconds of physical activity if you are sedentary, or 40 minutes if you are feeling ambitious, be safe whatever you do. If you are active, count 40 of anything you do (lifts, dips, steps, jumps, push-ups, sit-ups, etc.) to celebrate with me my 40th birthday. 4-0 means Fun-0 today! 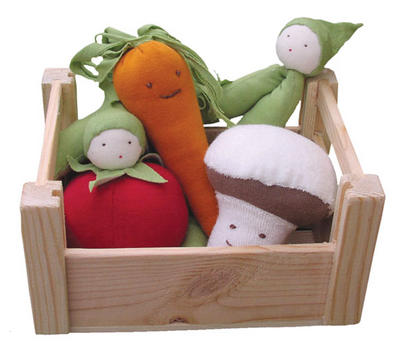 Fair Trade's organic wooden crate of vegetables, carrot, green bean, mushroom and radish, is very reasonably priced at $24.95, as are other things on the site.

I wish Amazon.Com carried a selection like Fair Trade's.

Princeton, In Service to Dillard

14 days to my 40th birthday, my normal healthy lifestyle is going to get even healthier! How? you may ask. Well, by tweaking my current routine to include more exercise and becoming more involved in my local community. Nowadays, observers refer to 40 as the new 25, in my case, if I went back to 25, I'd go back to one of the saddest periods of my life, so I'd rather be the way I am now. At 25, I regularly drank Diet Pepsi or Diet Coke, both which make me sick now, I ate Pringles which are among the list of the worst foods to have, and smoked! Not only that, I was less toned and seemingly heavier than I am now. So, yes, I may be turning forty, but lifestyle-wise, I'm probably younger than I've ever been.

Another Way to Help: Self-Publishing a Book

Marilyn, of California Fever, has collected a set of essays of her life in the Caribbean into a book, self-published it @ Lulu, to donate her share of sales to hurricane relief. I'm in awe, what a great idea!

eRideShare: Carpooling Listings Thru the Roof

Incredibly high gas prices have logically sparked an increase in offers/requests to carpool. The owner of eRideShare corroborates:

"eRideShare never had more than 34 commuter listings in a single day prior to August; Thursday, September 1st, there were 265 new listings."

Carpool away! My husband and I seldom drive these days compared to how much we drove before. When we do drive, it's only to his office less than two miles away, or elsewhere nearby. If you notice on eRideShare, there are no listings for San Juan, Puerto Rico, sadly. That should change, gas prices here were over 80 cents per liter last time I was @ the pump.

My mom mentioned, last night @ dinner before my brother arrived, that my grandmother used to make delicious black beans. The key was to add a lot of onion. Well, today I tried doing just that, for a spectacular result. I diced one and half medium yellow onions. Sauteed the diced onion with a couple cloves of garlic @ medium heat in extra virgin olive oil until translucent, about six minutes. Then, in went the black beans, from a can, non-organic (too bad) Goya low-sodium. After stirring the beans into the onion/garlic combination, I sprinkled generous cumin over the entire top surface of the dish; then covered it. In fifteen minutes, after one more stir midway, the beans were ready. My husband ate his lunch happily, the black beans with organic brown rice first, his boiled-to-perfection piece of pumpkin next and, for him only, a seasoned breast of chicken (I don't eat meat, except maybe picadillo).

At dinner tonight, my brother proudly announced that Cingular, his employer, will match up to $1 million that any employee donates to Katrina Hurricane relief. We started collecting money from those around the table, even if we fall way short of the million, it'll be nice to know every cent was matched. This makes my second donation for hurricane relief, I wish my first had been matched!

The blogosphere is abuzz with ways to help Katrina's victims now. I've sent in my donation to the Red Cross and blogged about offering housing to hurricane victims, your suggestions of further ways to help are welcome. Plus, to jog everyone into action, Robin makes a sharp point: "Sadly those with the least lost the most, and if they didn't think the government cared about them before, well, now they know for sure."