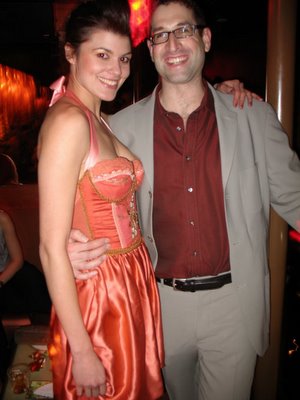 Summer Rayne Oakes and Josh Dorfman dressed for beyond success, organized a green party in NYC that took place a few days ago. Triple Pundit, who was there, writes:

Last Wednesday I was in New York for the ICI-nyc party. A hip gathering of
environmentally minded folks who also happen to be leaders in fashion, design,
media and other societally influential outlets. The event was masterminded by
Josh Dorfman of Vivavi and Summer Rayne Oakes, aka 'the green fairy'
as a statement countering "the burlap sack theory" - namely that, in the words
of Dorfman, "ecologically sound products have to suck".

It was an awesome party, with some great press coverage. The whole thing represents an interesting trend in the environmental movement, and in my opinion, it's a good thing. It's more than just a "branding" of environmental thinking as hip - it's a bit of a reality check - a statement that says, you don't have to really "give up" the basic things that are fun and social, like parties and fashion, in order to
actively participate in a "greener" society.

I think the implications for business are twofold - one, a new set of successful entrepreneurs is exploding out of this movement who will be respected and emulated around the globe, and two, with a 'fashionable edge' - even if it's understood only superficially by many people - environmental demands by customers of all business will continue to increase.

My friend, Geoff, blog author of Ars Politica, writes about elected officials who alter, thru their staff, their Wikipedia articles, replacing existing information with the official elected official's biography. What if McDollar's (the mammoth chain of toxic, bad food mostly marketed to children) replaced its own page, to eliminate the ugliness and any controversy which may rightfully appear in its existing Wikipedia page? Remnants of my excellent dinner tonight, my husband had dinner out with his aunt and uncle
blogged by: Frances M. Pabon

Retagging in the Meme of Fours 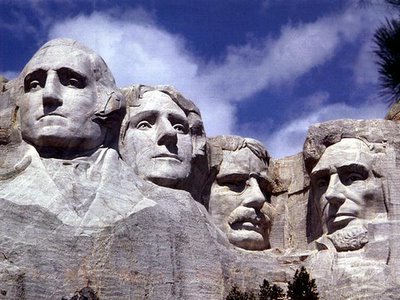 Given the fact that looking @ my life this way makes me smile each time, and that my talented, much admired blogfather Xian tagged me from his personal blog that triggered the birth of this blog and all my others; I'm taking the liberty to share here, with a bigger audience, my "Meme of Fours" with the bonus that I get to tag Cindy of Lotería Chicana, Geoff of Ars Politica, Daniel of Construct and Robin of "Shaking Her Assets: Chat w. Robin and Renée" here in addition to the Yahoo! 360 friends I've already tagged :)!

My blogfather Xian has tagged me in this "Meme of Fours" -- at first, I thought "all fours" but quickly corrected myself. Nice coincidence that photo has four: Former United States Presidents (left to right): Washington, Jefferson, Roosevelt and Lincoln carved into Mt. Rushmore (link below).

Four Jobs You've Had:
1 . Slide Projector Operator for Princeton's Religion Prof. Horton Davies, God give his soul good rest.
2. Research babe, er administrative assistant, for wunderkind, tenured young Wafik S. El-Deiry, MD, PhD. of the University of Pennsylvania.
3. Biotechnology Expo, advanced hematocrit and blood analysis desktop machine kiosk person (for my dad's company).
4. Babysitter to two professor's sons, one loved me so much he didn't want me to leave, the other was too young to voice his view (he was nine months old), but his family wanted me to move in!

Four Places You’ve Lived:
1. Okinawa, Japan (Hai, but I was too young to really remember, I was born there)
2. Las Vegas, Nevada (we moved there after my dad was transferred from the Air Force base in Okinawa, I was still too young to remember much except the Cowboy Neon sign).
3. Rapid City, South Dakota: Loved it, especially going to Mt. Rushmore, the Flintstones Park and the Badlands
4. Philadelphia, PA and Tamarac, FL: why lumped together? because this is the meme of fours....

Four TV Shows You Love to Watch: (ouchy ouch, I don't really watch TV, but here go some shows I can tolerate/watch)
1. Monday Night Football
2. Cooking Shows (30 min. meals w. Rachel, the Barefoot Contessa, come to think of it, pretty much anything on the Food Network)
3. Oh my, I'm horrible, all I can think of are: oh, documentaries on PBS, the Discovery Channel or the History Channel
4. too bad, I don't watch TV, wait, Sunday Night Football

Four Places You’ve Been on Vacation:
1. San Antonio, Texas: ♥♥♥
2. Tortola and Virgin Gorda, Virgin Islands: ♥♥♥♥ (meme of fours, right?)
3. Europe (Spain, France, Germany, England, Italy, Switzerland -- a summer tour my mother sent my sisters and I to get rid of us for the summer.) ♥♥♥
4. México: My mother misheard the airline person on the phone telling her my flight departure, the airline person said "trece horas", which is thirteen hours, which is 1 p.m. My mom wrote down "tres p.m. or 3 p.m." Making me lose my flight and have to spend another day in Ciudad México alone.

Four Blogs You Visit Daily:
1. Yahoo! 360 to see if Rajesh, Katzenjammer, Lionel, MarshaGarsha, Reggie, Vijay, Angellique, Mannar, Hammack, Pablo, Juancho, my friends from Spain (Ignacio, JuanJaen) and others have written anything.
2. Bloglines to see my feeds
3. Blogcabin but I think I may miss a day once in awhile
4. My own Blogger blog, to jump to other blogs listed on my sidebar

Four Places You’d Rather Be:
1. the Virgin Islands
2. Tamarac, FL or Philadelphia, PA - lumped together again, ah, oh so personal
3. Cuba
4. Peru or India (I have friends in both places).

Four Vehicles You've Owned:
1. A silver Ford Mustang, in the '80s
2. A baby blue Ford LTD that I inherited from my grandfather, it looked like a cop car
3. A silver Mitsubishi Montero SUV, stick shift, very good car
4. A silver Pontiac Sunfire '00, that drove from Philadelphia to Tamarac to Key West to Ground Zero and elsewhere many times 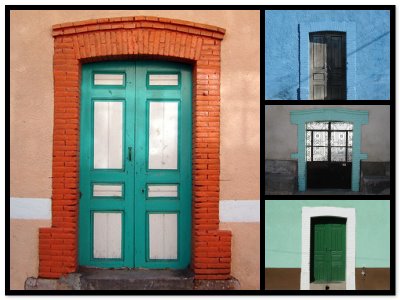 Cindy Mosqueda, the gifted blog author of Lotería Chicana, spent the holidays in México. Her composite "La Puerta Negra" (The Black Door) of doorways of the Cargadero in Zacatecas transports me, very much like Daniel's and Ignacio's photos have in the past. Many thanks Cindy!